This is a continuation of Part 1 and Part 2 of the Zeotrope project.

This was the final phase of our homework assignment for Design for Digital Fabrication which was to design something algorithmically and laser cut it. Now that the mechanics of the Zoetrope animation were proven out the previous week, it was time to generate something elaborate. I was particularly inspired by John Edmark’s animated bloom sculptures:

After seeing what he made, my goal was to create an animation that:

I searched around the web for an animation that would fit this criteria and when I came across the chapter on cellular noise in The Book of Shaders, I realized that the Voronoi Algorithm would be ideal.

I couldn’t use an out of the box Voronoi generator in Illustrator or Processing because I needed to:

The only way to do this would be to have full control of the Voronoi generation.

For a great explaination of the Voronoi algorithm, see the book of shaders. In order to be able to laser cut Voronoi cells, I would need vectors that define where the edges of the voronoi cells lie. Inigo Quilez’ Voronoi Border variation could accomplish this, as it clearly defines the difference between a border and the interior of the cell:

source: The Book of Shaders

This flavor of the algorithm works by, for each pixel, finding the two nearest Voronoi points, bisecting them, and calculating the distance of the pixel from the plane that is perpendicular to the line that intersects on that bisected point. The pixel’s color is determined by this distance. To make this shader just render borders, I modified it by using the step function to determine if the pixel should appear, and setting that as the alpha:

view all of the code here

As it stood, the cells in the edges used points that extend beyond the edges:

This prevented a frame from tiling seamlessly next to itself:

To fix this, in all of the cells at the edges, instead of searching for points that extended past the edges, I used points from cells on the opposite end:

view all of the code here.

This caused the edge cells to wrap around to the cells on the opposite end, letting the frames be tilable:

Projecting the Animation onto a Circle

For this animation to be projected onto a circle for the Zoetrope, it had to:

I used Processing to accomplish this, as I discovered it’s incredibly easy to work with shaders and render frames using a buffer.

To make the animation 33 frames long, in Processing, the u_time uniform was set to be frame / 33:

In the shader, the animation was set to repeat every sin(u_time * 2 * PI):

To render the frame as an arc with a transparent background, the x and y were converted into radial coordinates, and everything outside of the 2 * PI /33 size arc had an alpha of 0, making those areas transparent:

To project this onto a circle in Processing, each frame was rendered into a PGraphics buffer, then the scene was rotated, scaled, and the buffer was rendered as an image in the proper size and rotation:

As the voronoi approached the center of the circle, the borders become narrower and more skewed - this would be nearly impossible to cut. To improve this, within a specified radius, the animation was changed to be a different voronoi animation from the book of shaders, meatballs:

With the animation created, I wanted to laser cut multiple layers of it, each with a slightly larger border, enabling the physical layers to have different colors and stack on top of each other, creating a sort of 3D/depth effect. To generate these layers in processing, I parameterized the shader to be able to specify the border size and the color it renders. For each layer, the animation was projected around the circle with these parameters set layer by layer:

view the code for this here

Converting these layers into vectors that could be laser cut was pretty straightforward. First, I modified the processing script to render each layer as a separate image with resolution 2000x2000, and white for where the borders would be: 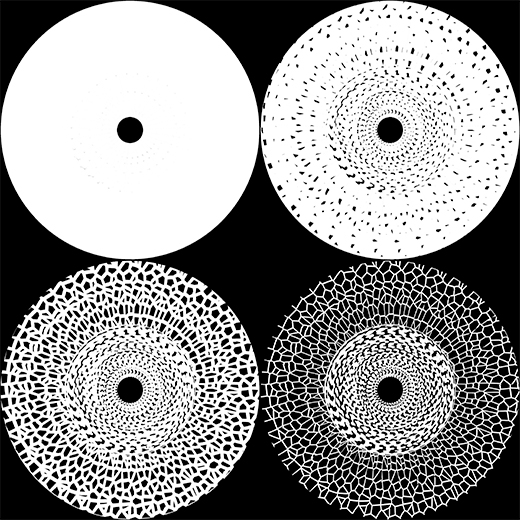 To convert a layer into a vector for laser cutting, in Adobe Illustrator, I:

The laser cutter was able to easily read these vectors and cut the layers: 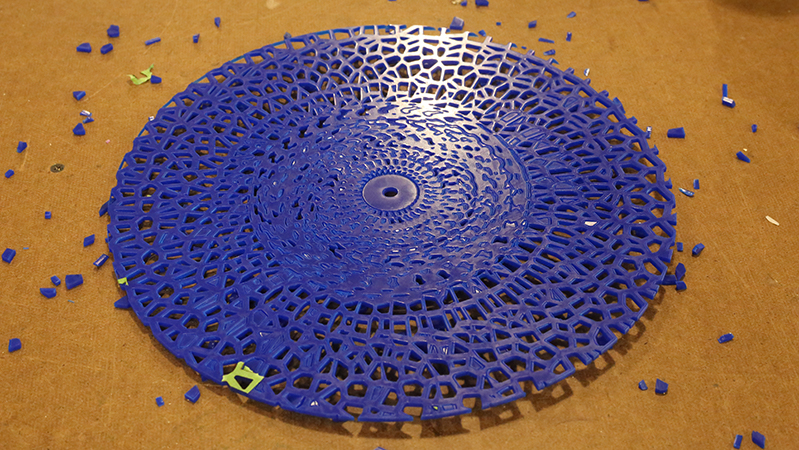 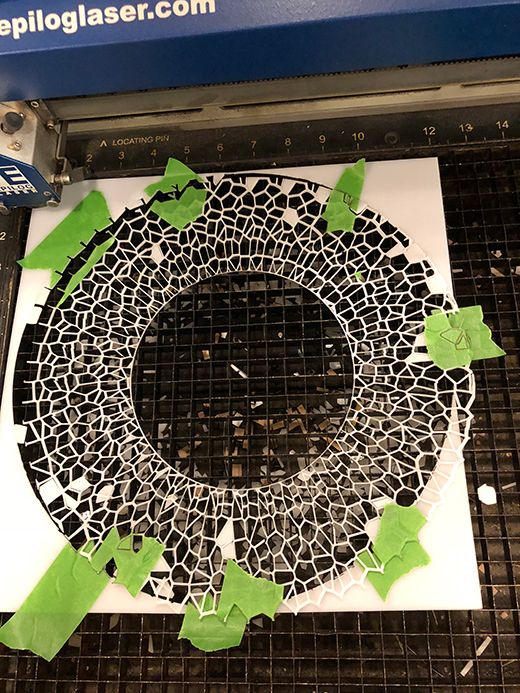 I tried stacking all the layers as originally intended on top of each other, but the blue on the bottom was barely visible under the purple. I found the best combination was white top layer, blue under it, and white background:

The middle part, the meatball variation, ended up with a few gaps where the animation was not attached to the rest of the disc. I had intended to attach these back on, but these pieces fell through the cracks when laser cutting. I left it off the main zoetrope animation: 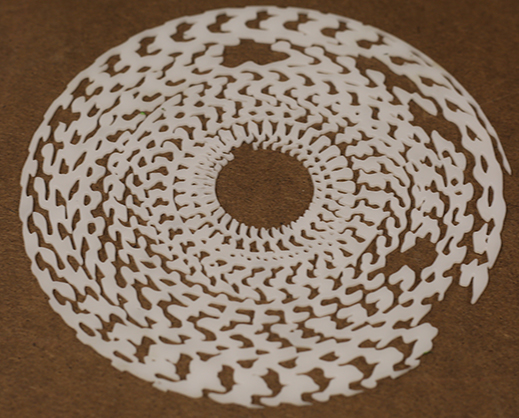 I used acrylic glue to attach the top two layers to each other: 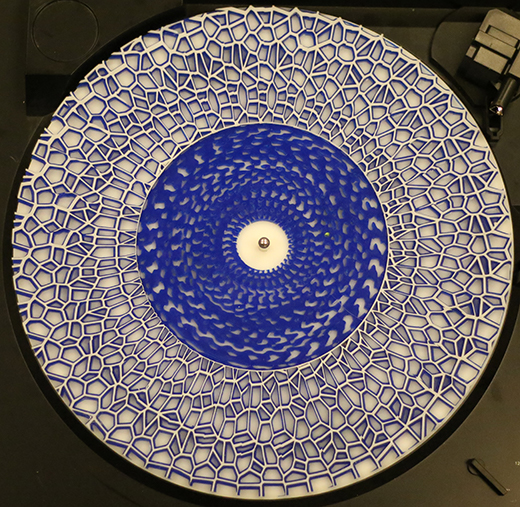 When it came time to film this animation, I wanted to do it without needing the rgb led flashers from my previous experiments because the camera does not properly capture the strobe effects. I realized then why in Retchy’s post on Zeotropes he recommended using 33 frames of animation:

At 45 rpm, or 0.75 rotations per second, with 33 frames, dividing the frames by rps gives us 24.75 frames appearing each second. This lines up closely with the camera’s standard 24 fps. I filmed this using the Canon Mark III generously provided by ITP; with a high shutter speed (1⁄4000), this created the wonderful effect of a physical, seamless animation:

I’m incredibly pleased with the results of this experiment as it surpassed my expectations. I’d like to explore creating some more animations such as one that depicts entering an infinite spiral. I also want to figure out a proper setup for the flashing light and interacting with its speed. I hope others can learn from this, use it as a resource, and be inispired to create something better.